A move from Washington didn’t stop Melvin Williams, Jr. and his family from continuing with their tradition of service.

“We moved to Chicago a couple years ago and I initially found Honeycomb through an article,” says Melvin. Although preferred projects were at capacity when registering, this confirmed to him this was something he wanted to be a part of.

It was just a matter of time before Melvin realized that his company CTC already had a strong relationship with Honeycomb. Many of his colleagues regularly volunteer and Jennifer Chung, CTC’s Director of Technology Business Management, serves on Honeycomb’s Board of Directors.

Melvin and his son, Anderson (age 9) have been to 15 Honeycomb service projects since they started volunteering in early 2018. Although this is a special way for this father and son team to spend quality time together, Melvin’s wife Laura, and daughter Gina also love to get involved. Volunteering at various projects with Honeycomb gives the family a chance to explore their new home and get to know Chicago.

Anderson has several Honeycomb favorites and loves earning his Honeycomb pins. “Playing soccer at Shirley Ryan AbilityLab, working with animals at the Anti-Cruelty Society and creating activity kits for children staying at La Rabida Children’s Hospital are just a few,” says his dad.

Personally and professionally, Honeycomb holds a deeper meaning for Melvin. “You want to be able to bring your whole self to work…CTC not only encourages volunteering, but they roll up their sleeves and get involved,” Melvin continues. “This is a great statement of the company’s values.” CTC received Honeycomb’s 2019 Outstanding Community Partner Award for their incredible commitment to Honeycomb work over the years. Watch CTC’s Honeycomb story here.

Melvin is excited and hopeful for Anderson to continue his engagement and join Honeycomb’s Leadership Corps in the future, a new program for dedicated teen leaders. “Volunteering is a natural part of his DNA,” says Melvin, “he’s an influencer and grows the Honeycomb hive by involving his friends.”

Outside of attending Honeycomb projects, the Williams Family keep busy. Melvin is the Chief Legal Officer at Chicago Trading Company and Laura is a Senior Contract Manager at Accenture. Anderson loves football, drawing and is active in cub scouts. Gina enjoys traveling, cooking and is a consultant for Ichor Strategies in the City. The Williams’ live in Wilmette and always look forward to game and movie nights and love traveling together. 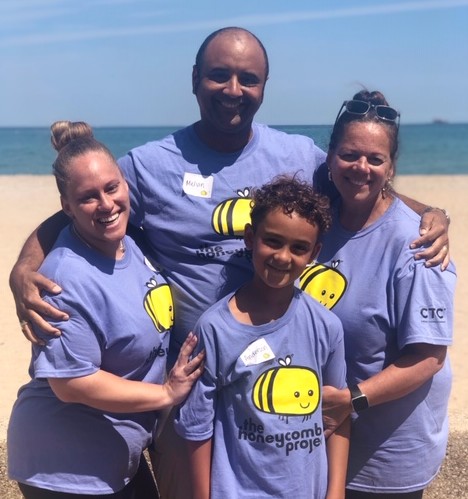